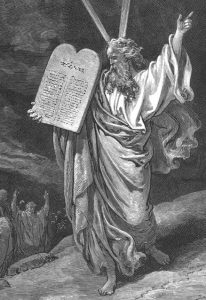 The volume begins with the Biblical account of Creation. It pictures God acting out of his own will and bringing into existence all that has ever been. The Fall of man is recorded in Genesis 3 but along with the dark story comes the first messianic prophecy of the coming Christ (Genesis 3:15). The story of Noah and the Ark follow which details God’s hatred of sin and his decision to destroy his creation except for Noah and his family. Beginning in Genesis 12 and continuing until the end of the book we read of the Patriarchs and the formative years of the Hebrews. The roller coaster ride of Joseph’s life serves as somewhat of an interlude but provides the background for the Hebrew presence in Egypt.

Many key verses are possible in this 50 chapter book. But I have chosen Genesis 3:15 for it begins to unveil God’s redemptive plan for lost mankind.

“I will put enmity between you and the woman,

he shall bruise your head,

and you shall bruise his heel.”

There is no explicit comment as to who penned the book of Genesis. However a very strong tradition points to Moses and even Jesus gives him the nod for authorship.

Circumcision, here mentioned by Jesus as being given by Moses, is found in Genesis 17:12. Internally, the book appears as a seamless prologue to the book of Exodus which Jesus directly attributes to Moses (Mark 12:26) as does the writer of Hebrews (Hebrews 9:19).

Obviously the date of composition is closely tied to authorship. If we are correct that Moses is the author then it seems most reasonable that Genesis was composed during the 40 years of wandering recorded elsewhere in the Penteuchal record.

Some are puzzled that Moses could write of the Creation and of events that predated his own birth by several centuries. However Moses was only writing that which he was inspired to write. As Gleason Archer says  “Moses seems to have served as a Spirit-guided compiler and interpreter of the pre-existent material which had come to him from his forebears in oral and written form.” ((Gleason Archer, A Survey of Old Testament Introduction, Moody Press, 1994, pg 193)) We would add, and I think Dr. Archer would agree, that all of the material in chapters 1 and 2 likely came directly from the Holy Spirit as no one was there to make an oral record.

Genesis is significant in that it gives us a thorough history of God’s earliest interactions with man. It shows he cared enough to immediately begin careful plans for man’s redemption. Sin and its unavoidable consequences are revealed through the narrative of Adam & Eve, Cain & Abel and the Noahic flood. Yet in all those cases hope was extended through the grace of our Creator.

1 comments On Genesis – Know the Book