Resistance is Futile…or Is It?

“You will be assimilated…Resistance is futile”

– Locutus of The Borg (Star Trek) 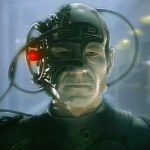 Assimilation is the process of absorbing one thing into another such that there is nothing left of the original item. Star Trek aficionados understand the term from “The Next Generation” when an alien race tries to eliminate all of humanity by assimilating them into their own collective consciousness. Sounds bizarre right? Not so much. In fact it is very common and happening to you right now.

Our own culture and society work hourly to assimilate Christians. Society seeks to remove any vestige of Christianity from the public square. All we are, hope for and desire are to be melded into the godless void of our present culture.

This assault, coming from different directions and seemingly very different people is all part of an effort to change our way of viewing the world. It assaults our very understanding of right and wrong. In his book Culture Wars, author James Davison Hunter observes:

“Once again, what seems to be a myriad of self-contained cultural disputes actually amounts to a fairly comprehensive and momentous struggle to define the meaning of America—of how and on what terms will Americans live together, of what comprises the good society.”

The Battle is far greater than politics and government. Government is only a tiny part of the issue and is more of a symptom than a cause. The real issues lie in the assimilated hearts and minds of our neighbors, co-workers and family.

Daniel, Hananiah, Mishael and Azariah were young nobles from Judah. They were God’s people who had been captured and taken as slaves to Nebuchadnezzar’s court in Babylon. Nebuchadnezzar wanted them assimilated into Chaldean culture and society.

“Then the king commanded Ashpenaz, his chief eunuch, to bring some of the people of Israel, both of the royal family and of the nobility,  youths without blemish, of good appearance and skillful in all wisdom, endowed with knowledge, understanding learning, and competent to stand in the king’s palace, and to teach them the literature and language of the Chaldeans. The king assigned them a daily portion of the food that the king ate, and of the wine that he drank. They were to be educated for three years, and at the end of that time they were to stand before the king” (Daniel 1:3-5).

Among  other things, the Chaldean literature would have included writings from the priests of Marduk, Nebuchadnezzar’s chosen idol. They might read them but they would not bow.

Daniel immediately stakes out his position. “Daniel resolved that he would not defile himself…” Daniel might be compelled to live in the Babylonian world, much as we must live in our culture, but Daniel would not conform to it. At the first opportunity, Daniel, speaking for the other three, refused the king’s food and wine and insisted on water and vegetables (Daniel 1:8-12). At the end of 10 days it was clear to all that Daniel’s plan was best. God had blessed his resolute actions.

There is no question Daniel, Shadrach, Meshach and Abednego were successful in the world of the Babylonians. They were appointed as top administrators in the province and in the palace. From our perspective, we know their success came because of their faithfulness but it also teaches us that we can be successful in our careers even when we maintain our distinctive Christian nature.

But there is a line over which these good men would not step. Certain Babylonians brought malicious charges against Shadrach, Meshach and Abednego. Perhaps motivated by jealousy these charges were nevertheless true. The men charged that  Shadrach, Meshach and Abednego were refusing to worship an idolatrous image Nebuchadnezzar had erected. Their refusal could cost them their careers and even their lives. The three are summoned before the king himself and offered a chance to live. All that was necessary was to worship the idol (c.f. Daniel 3:1-6; 14, 15).

“O Nebuchadnezzar, we have no need to answer you in this matter.  If this be so, our God whom we serve is able to deliver us from the burning fiery furnace, and he will deliver us out of your hand, O king. But if not, be it known to you, O king, that we will not serve your gods or worship the golden image that you have set up” (Daniel 3:16-18).

We see two important items. First, Shadrach, Meshach and Abednego were absolutely committed to Jehovah God. No matter the cost, they would not compromise their faith. Second, the three did not know how or if God would deliver them! But it still did not matter. They would not bow!

This should be instructive to us today. We face many challenges to our faith, rarely to death, but major challenges nonetheless. It is so easy to cave. It’s easy to assimilate. But if we learn from Shadrach, Meshach and Abednego we will remain resolute even in the face of seemingly insurmountable obstacles. We must trust God and remain wholly committed to him. No slacking. No compromise. No assimilation.

Shadrach, Meshach and Abednego resisted but they still were cast into an incredibly hot furnace. You probably know the rest of the story. They were delivered by God, Nebuchadnezzar was humbled and they were promoted. But this good ending is only because they remained faithful.

Likewise, Daniel refused to stop praying even when commanded to do so by the King Darius. Daniel faced a den of hungry lions for his devotion to God (Daniel 6:1 ff). In fact, as soon as the law was established, Daniel went to his bedroom, through open the windows and began praying. He was seen and brought before the king to answer for his “crime.” Although the king could not stop the execution, he hoped Daniel’s God would. And he did just that. The mouths of the lions were closed and Daniel walked out of the den. The malicious men were themselves thrown to the lions and God was glorified throughout the kingdom.

Why should we be any less fearless? Why should we hide our faith. Our strength will change others. It does matter how we live. He matters when we reject compromise. Daniel refused to meld his faith into that of the Medes. He would not assimilate and he was blessed.

The moral of this story…

Resistance is not futile!