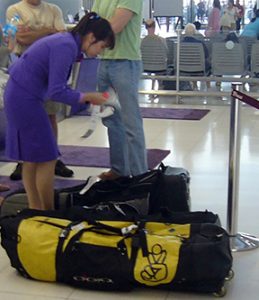 I travel a lot. Sometimes I go domestically, sometimes internationally. But wherever I travel, I always have baggage. It’s a necessary evil. When you travel you have to carry your stuff. That is a real pain.

But managing a suitcase or duffel bag is easy compared to intellectual baggage. Known by other pejorative names like bias or prejudice, it is always nearby. I’m not sure anyone is ever free of its weight.

For the Bible student, an awareness of and careful approach to these prejudices is critical. As I approach any subject I must accept at least two critical facts.

Jesus often dealt with such baggage in others. Do you recall his gentle rebuke of Nicodemus (John 3:1-15) who should have known better? Do you remember his words to the misguided woman of Samaria (John 4:1-26)? What about his harsh words to the scribes and Pharisees in Matthew 23? Even the thinking of his own apostles was clouded by their preconceived notions of physical, political deliverance (Acts 1:6).

Errors find an easy path when we assert our own near omniscience.

Let the Bible student use extreme caution when “rightly handing the word of truth” (2 Timothy 2:15).

But before plunging into a sort of spiritual agnosticism we should add two more critical facts to our list.

While many will agree that God’s word is truth they will quickly deny the fourth point. They would argue that our biases are too big to be removed. They would say that our particular upbringing and our education (formal and informal) clouds our understanding.

We do have intellectual baggage but it can be set aside. Just as I check my bags before boarding the airplane and stow my carry on in the overhead, I can check and stow my prejudices too. Then, I can know God’s word. Truth can be known. It is intellectually dishonest to discount reasoning and argument simply because it agrees with my “tradition.”

I appreciate those who warn against our biases. But I see increasing numbers of those who suppress truth (Romans 1:18) in favor of an agnostic method of knowing nothing. Such strikes at the very heart of God’s revelation.

I am full of biases, prejudices and preconceived notions. I have to work to set them aside as I study. You do too. But do not think that truth cannot be known.

Man in the Mirror