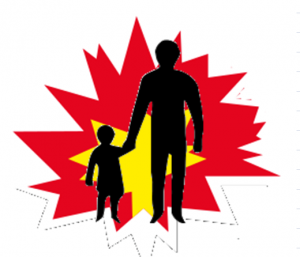 There is a human rights crisis in the middle east. Syria is expanding its influence, Hamas is ginning up violence, Israeli vigilantes are responding violently and slowly the United States is being dragged back into a deadly conflict. But this website is decidedly not about politics or foreign affairs. But I am concerned about the human factor, especially the children.

My worries are not about the adults so much as the defenseless little ones.

In any violent conflict, children suffer and die. The cause or allegedly justness of any conflict does not change the death toll nor lessen the trauma inflicted upon the children. Christians should be heart broken. Jesus loved children and was often found surrounded by them (Matthew 19:13-15). He said that children represented the nature of the kingdom of Heaven.

These children are absolutely innocent. Their only “sin” was being born into a region where hatred rules.

Children Are Learning to Kill

Today’s killers were yesterday’s children. The mid-eastern violence is a self replicating cycle that knows no end. Children who once played with sticks and dolls today fire guns and throw hand grenades. Somehow, the cycle must be broken. Children who have witnessed bombings and killings must decide that it is not worth it any longer.

The problem is that there is no moral leadership influencing the people of the region. Hatred rules and there is no one to say stop!

The love of Jesus Christ, almost unknown in the region, is the answer. These groups are anchored in tit for tat violence that will not otherwise end. Only the message of salvation has a chance.

Christians ought be in prayer constantly over this slow moving tragedy. We pray, not because of some supposed, coming rapture or earthly kingdom, but because prayer is the only way to lessen the violence. We pray for our U.S. leaders but also for the national leaders and militant leaders. We pray for the unnamed community leaders who can influence the conflict. We pray for the mothers that they teach peace to their children.

If we fail to pray and assert our influence for good the conflict will continue until there is no one left to die. The stakes are so high.

Man in the Mirror