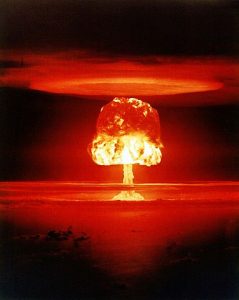 Tensions between the USA and North Korea are ramping up. News reports this morning report that the USA is sending nuclear capable bombers to South Korea as well as a missile defense system strongly opposed by the Chinese. In fact, China is reportedly re-thinking its policy against a nuclear first strike because of the missile defense system policy. Dark clouds are building over the Korean peninsula. Now, right now, is the time to begin praying specifically for peace. There is no good military outcome. Any combat will, and always does, result in the injury, maiming and death of innocents. Far more innocents have died in our recent wars than combatants. We must seek a solution that does not result in killing children. A single nuclear detonation on the peninsula would certainly result in multiple nuclear detonations in retaliation.

By the end of the first hour, casualties could exceed well over 100,000 people. In a global thermonuclear was, deaths could easily exceed 10,000,000.

There were many wars in the Old Testament. Examples would include Jericho, Ai, the Philistines, the Amelikites, et al. These were not wars over policy or politics. The conflicts were not motivated by gain. They were examples of divine judgement against the offending nations. When 300 Israelite warriors destroyed over 100,000 Midianite soldiers, It was God Himself who directed and fought the battle for Israel (Judges 7:1-8). We cannot point to the Old Testament to show that war is good. It is not.

So what can we do in the face of a nuclear-powered leader who seems more like a spoiled brat with a screw loose? The North Korean government is a tightly closed society that adores their leader like a god. There is no one to restrain him. What can we do? We must pray frequently and specifically for the leaders involved. I am asking for daily prayers for these people.

These names are odd to westerners but they may be the four people who can bring peace to the region. By praying now, we can beg our Lord to stifle the drumbeats of battle before thousands die. Our goal as Christians is to advance the cause of the Kingdom of Christ.  We are Christians first, citizens of the USA second. How can one spread the gospel in the hatred of war?

One more thing: When the lifeless body of a child lies in the dirt of a small village in a far away place, does it really matter whose fault the war is?

As always, your comments are welcomed and especially desired on this topic.

What is the New Testament (part 2)

Courage: But if not