“God bless us every one” is the plea of little Tim Cratchit in Charles Dickens’ immortal A Christmas Carol. Bobbi and I watched the Patrick Stewart version (George C. Scott is the best, just saying) last night. The lead character is Ebenezer Scrooge, a tight-fisted, always-grumpy banker who is visited by four ghosts. First, his deceased business partner, Marley, who warns of a mighty chain that Scrooge is weaving in the afterlife. Then three ghosts who come to prompt Scrooge to change before it is too late. Scrooge’s answer for the poor is to put them in prisons or workhouses. If they die, that will “reduce the surplus population.” Scrooge changes when he is forced to look upon the poor and downtrodden that fill 19th century London and when his own impending death is revealed.

A Christmas Carol was published in 1843 in London. Sharp socioeconomic divisions faced England. These divisions were the background for Dicken’s work. Mid-19th century London was not so different from early 21st century America. The lower economic class has grown poorer while the wealthiest have increased their assets.

The answer is not taxation, which only increases the wealth and the power of the political class, but true charity from Christians who give willingly and not by compulsion (2 Corinthians 9:7). Charity cannot be compelled.

Out of 230 nations, the CIA Factbook says the United States has the third-highest gross domestic product. In 2019, before COVID, Sally, elections, and divisions in the populace, just over 10% of our citizens lived in poverty.

Meanwhile, the stock market has soared almost 60% since its pandemic low in March (S&P index).

People become poor for many reasons. Sometimes it’s a layoff or termination, perhaps a sudden illness or accident. Some people are poor because of really bad decisions. Drugs, alcohol, and gambling hurt families at an alarming rate. Maybe surprisingly, the Bible doesn’t use a litmus test to determine who needs help. Maybe, because the victims of poverty often are not the cause of their poverty. Those who refuse to work are excluded (2 Thessalonians 3:10), but their children indeed are not.

Moses wrote, “If among you, one of your brothers should become poor, in any of your towns within your land that the LORD your God is giving you, you shall not harden your heart or shut your hand against your poor brother, but you shall open your hand to him and lend him sufficient for his need, whatever it may be” (Deuteronomy 15:7, 8). In verse 11, “For there will never cease to be poor in the land. Therefore I command you, ‘You shall open wide your hand to your brother, to the needy and to the poor, in your land.’” God’s wrath burns against those who abuse the poor: “The LORD will enter into judgment with the elders and princes of his people: “It is you who have devoured the vineyard, the spoil of the poor is in your houses. What do you mean by crushing my people, by grinding the face of the poor?” declares the Lord GOD of hosts” (Isaiah 3:14 – 15).

Jesus’ command to the young ruler of Matthew 19:21 was clear: Jesus said to him, “If you would be perfect, go, sell what you possess and give to the poor, and you will have treasure in heaven; and come, follow me.”  This underlines what Jesus previously said about our priorities. “Do not lay up for yourselves treasures on earth, where moth and rust destroy and where thieves break in and steal, but lay up for yourselves treasures in heaven, where neither moth nor rust destroys and where thieves do not break in and steal. For where your treasure is, there your heart will be also” (Matthew 6:19 – 21).

Last night,  after watching A Christmas Carol, Bobbi heard of a family that had been thrown out of the house where the four of them had been “couch-surfing.” This morning, It dropped to 25 degrees. Can you imagine the mother’s fear?

Many are in your zipcode.

What a mismatch between the happy crowds at the store who buy frivolities for the holidays and those who have less than nothing.

Remember the poor. Do what you can to help, for your work is of the Lord.

Jesus as Propitiation: A Gift for All

Jesus is Coming: A Note to Our Readers 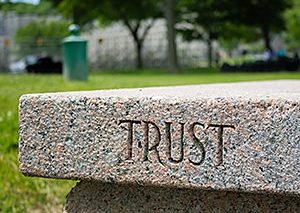 Is Baptism A Work?