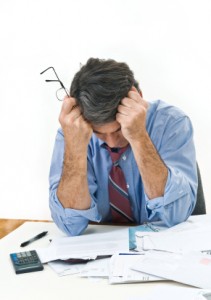 Times are tough. It’s the end of the month and the bills are piling up. By next week you’ll have a whole new set of bills to pay. It may seem that there is only catastrophe waiting. Of course, like everyone else you are worried that your money is revolting against you and quickly trying to master you.

Just remember, you are the master of your money!  The very good news is that you can win and can pass through these difficult times with just a few slight changes in your thinking. If you will adopt these practices two things will happen. First, you will make better decisions about money and avoid some of the problems you now deal with. Second, you entire perspective on material goods will shift. I can’t make you rich but I can help you change your point of view!

One of my favorite passages on money comes from Paul in 1 Timothy 6:6-10. Here is how the ESV puts it:

“Now there is great gain in godliness with contentment, for we brought nothing into the world and we cannot take anything out of the world. But if we have food and clothing, with these we will be content. But those who desire to be rich fall into temptation, into a snare, into many senseless and harmful desires that plunge people into ruin and destruction. For the love of money is the root of all kinds of evils. It is through this craving that some have wandered away from the faith and pierced themselves with many pangs.”

Let’s note a few lessons from this Scripture.

The word “content” and “contentment” stand out here. It was a state of life for Paul who declared in Philippians 4:11 that he had learned to be content in whatever situation he found himself. For Paul there was a very real difference in being content and being satisfied. Remember, he asked God on three occasions to remove that mysterious “thorn in the flesh” but God would not. Paul certainly wanted something better but he could accept his present condition with peace knowing that something better was still ahead.

Contentment is the art of finding happiness without paying for it. My cellphone is beginning to act up. AT&T says I am eligible for an upgrade to an iPhone! But why? It will cost more but will not make me happy. Can I learn to be content without one? Sure!

Contentment is also the art of acceptance. Take and use what life gives you now and be willing to wait for greater things later.

Count Your Blessings – Think of Where You Started

People need to remember where they came from – it helps to remind us of just how far we have come. Paul reminds us where we came from when he says “you brought nothing into this world and we cannot take anything out of this world” (vs. 7). When we begin to count our blessings we start to appreciate what we actually have – not bemoan what we do not have.

When Bobbi and I married, we lived in a townhouse. We had little and could barely afford the rent. Later when the company I worked with closed, I found myself working the night shift at a convenience store. Part of my job was mopping up after the drunks who came in to use the bathroom. It was a tough time. But when I think back on those days I see just how far God has brought us. He carried us through the darkness and into the blessings of his love.

Take sheet of paper and begin writing every blessing you can think of – leave nothing out. I can assure you that you will tire of writing long before you reach the end of the list!

Money Is Your Best Friend Until It Becomes Your Worst Enemy

If we chased after people like we do money we would be arrested for stalking. Many will do more for George and Abe than for their own family. They’ll work harder and longer and put up with more aggravation to make a dollar than they would ever accept from  their own family. We seem to think that money equals happiness. It does not. In fact, money can become your worst enemy.

Ask Bernard Madoff just what he thinks about his $50 billion in fraudulent wealth. He was so consumed by wealth that for years he juggled accounts trying to keep suspicious people away. His money sure isn’t doing him a lot of good is it? Those who pursued enormous financial gains through Madoff are now angry with him and with themselves for their greed which has cost them so much.

Paul’s comment in verse 9 that the pursuit of wealth “plunge people into ruin and destruction” seems to come straight from the headlines. Money is not a friend and it is not to be chased after. It is a tool only.

Wealth Just Isn’t All It’s Cracked Up To Be

A man I know of is very wealthy. He was born into money and is part of well known family. Yet this man is afraid to ride around in fancy cars and he often wears used work clothes just so people will not suspect he is so rich. He’s afraid he will be kidnapped!

Wealth, for all its supposed comfort and security often drives men away from God. I guess the acquisition of wealth causes one to trust in himself and not God. Man becomes too independent and no longer sees the need for a redemptive relationship with Christ.

Simon thought he was wealthy enough to buy the Holy Spirit. He could not (Acts 8:20). Money just ins’t powerful enough to accomplish the one thing we need the most and that is salvation from our sins. Ironically, that salvation is free (Romans 5:15, 16, 18).

We must have the proper view of money and wealth if we are to be happy in this life.

So Why Are We Here?

Only you can answer that question. But if your view of money is skewed toward the world you may have fallen into one of the traps Paul mentioned to Timothy (vs. 9). Maybe we’ve tried to impress people with our possessions. Someone said it well when they wrote that Americans “buy things they do not need with money they do not have so  that they can impress people they do not really like.”

Let’s be brutally honest. You may be in this position because you put yourself here. There may be some exceptions but I think most of us really did ourselves a disservice by our own view of money.

The good news is that there is help and there is deliverance. We will be posting more in coming days so be sure a check back. But for now, starting changing your perspective. Soon you will be far happier!

7 Ways to Squeeze More Out of Your Spiritual Life

There’s Got to be a Better Way