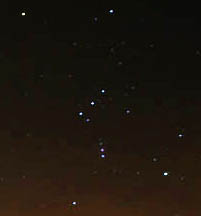 There is nothing like the crispness of an early Fall morning. When the skies are clear and the only sound in the neighborhood is an occasional, distant, bark of a dog, I can enjoy the few sweet moments of solitude before the day gets going. At this time of the year, the great constellation Orion hangs above the backyard like an overseeing warrior.

The ancients often looked to the skies and saw their gods outlined in the stars above. The Greeks believed Orion was a great hunter who was blinded by his father but eventually had his eyesight restored. At his death on the island of Crete Orion was placed among the stars by the Greek god Zeus. This mythology is quite late to the Orion story. The constellation was known as far back as the days of Job (Job 9:9; Job 38:31). In the passage from chapter 38 God asks Job if he has any control over the constellations of Orion and Pleiades. The obvious answer is “no.” Amos also mentions Orion and Pleiades (Amos 5:8) in his cry against Israel and declares that it is Jehovah who set them in the heavens, not Zeus.

God, through inspiration, has used Orion as an example of his power and might. It should not be surprising as the starry outline is considered one of the most obvious and best known of the constellations. Because of its location almost directly above the equator Orion is visible to the entire world.

But to me, its grandeur is not in its position or popularity. Its significance is in the God who put it there. The brightest star in Orion is Rigel. If it were possible to travel at the speed of light (about 6,000,000,000 miles per year) one would reach Rigel in about 800 years. The distance is staggering. Yet, the God of the Bible placed it there. How powerful must He be?

By the time God and Job spoke of Orion it was already an old friend to travelers and known well enough to refer to by name. Since Job is thought to have lived even before Moses we begin to appreciate it ancient nature. But God was there when Orion was begun!

Although Orion’s position is changing (by 14,000 AD it will be too far South to be seen in Great Britain) it has been so stable that men can actually use it and its stars for navigation. I have become accustomed to just looking up and seeing the hunter almost every night. He reminds me of the stability of Jehovah God. The psalmist declared of God, “from everlasting to everlasting you are God” (Psalm 90:2). Later he would say, ”but you are the same, and your years have no end” (Psalm 102:27).

God’s magnificence outshines the brightest star and is more beautiful than the most colorful sunset. As you look up into the night sky, be reminded of his beauty, power and eternal being. With David say,

“The heavens declare the glory of God!”

Just Leave It To God