Immigration and the Christian 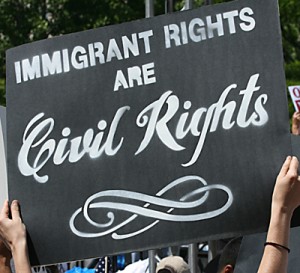 The media is full of immigration stories. Here in Baldwin County, Alabama the media is reporting on a gathering of Hispanic ministers who are concerned about a new immigration enforcement law. Many people of Hispanic background fear they will be targeted for deportation because of the law. The Hispanic ministers feel trapped between their love for their church goers and the demand to uphold the law.

One preacher said his mission is twofold: to preach the gospel and to teach morality. “If one is called before a judge… it is essential “to say I followed the laws, I obeyed the rules.”

Still many religious leaders are struggling with how to deal with this nexus of law and faith.

Immigration and the Christian, Talking Past Each Other

Both sides of the immigration issue must spend more time listening and less time talking. When neither side listens to the other and is more concerned about their own next comment no progress can be made. The result is a mush of mumbled arguments.

Both sides must also become more honest. Attempting to score points by attributing positions to your opponent – position you know they do not hold – is wrong. Listen carefully, speak slowly and always ensure honesty and integrity in your discussions.

To be clear, this article is a consideration of how we should respond to the undocumented or illegal immigrant.

Immigration and the Christian: The Clash

Immigration and the Christian: The Immigrant

At the heart of the discussion is a person. That person shares much in common with every natural born U.S. citizen. He has dreams and aspirations. He has children that he hopes will have a better life. He worries about his finances, his future, his health and the well-being of his family. His presence here is a demonstration of all those hopes.

But the undocumented person must accept that he has broken the law. Whether he knew it when he came to the U.S. or not, he is in violation of our laws. We’ll talk more about that later but let me say that we do him no service to pretend his status is not important.

The immigrant has something else in common with every U.S. citizen. We are all sinners. We are all in need of salvation. We all need a redeemer.

The fool says in his heart, “There is no God.”
They are corrupt, doing abominable iniquity;
there is none who does good.

God looks down from heaven
on the children of man
to see if there are any who understand,
who seek after God.

They have all fallen away;
together they have become corrupt;
there is none who does good,
not even one.
(Psalms 53:1-3)

Christians have a mission to those people regardless of nationality. Jesus said  it this way:

Go therefore and make disciples of all nations, baptizing them in the name of the Father and of the Son and of the Holy Spirit, teaching them to observe all that I have commanded you. And behold, I am with you always, to the end of the age.” (Matthew 28:19-20)

Called the Great Commission, Jesus’ words supersede anything man may say, but more about that shortly. The point is that Christians must not be fearful of reaching out to those in their community because of laws and legislation.

But some are worried that laws aimed at curbing illegal immigration may also prosecute those who help or assist those here illegally.

Jesus taught extensively about caring for the poor. As Jesus taught about a young wealthy man about his own greed and materialism he told the man to go and sell what he had and give to the poor (Matthew 19:21, Mark 10:21; Luke 18:22). The early church focused great effort on serving the needy among them (Acts 2:44-45; Acts 6:1-7). James told us to pay special attention to the weak and vulnerable (James 1:27). There is a Biblical mandate to aid and assist the less fortunate. (1)We speak here of those truly in need, not the malingerer or slothful.

If a person presents themselves in true need the church must respond if possible. Remember the example James used to describe dead faith:

“What good is it, my brothers, if someone says he has faith but does not have works? Can that faith save him? If a brother or sister is poorly clothed and lacking in daily food, and one of you says to them, “Go in peace, be warmed and filled,” without giving them the things needed for the body, what good is that? So also faith by itself, if it does not have works, is dead.

To have the ability to help, and the refuse to do so, is shameful.

Christians must not be fearful of reaching out to those in their community because of laws and legislation.

Immigration and the Christian: The Government

The Bible also teaches that Christians should be obedient to government. Government is a product of God just like the church and the family. As such we must respect the law. “Let every person be subject to the governing authorities. For there is no authority except from God, and those that exist have been instituted by God” (Romans 13:1). Paul goes on to say that opposing government is opposition to God.  Paul reminds Titus to be subject to government (Titus 3:1). Peter echoes that comment, “Be subject for the Lord’s sake to every human institution, whether it be to the emperor as supreme, or to governors as sent by him to punish those who do evil and to praise those who do good” (1 Peter 2:13-14).

Some examples from Scripture will help. Paul submitted himself to government even when he was falsely accused. Beginning in Acts 21:7 Paul is accused of causing a riot and is arrested by Roman officials. He does not resist the arrest and will even say the he will submit to death if he is guilty (Acts 25:11). But Paul also uses the Roman system, as permitted by law, to protect himself (Acts 22:23-29; Acts 25:11). Roman was terribly oppressive and yet Paul submitted to their authority.

But we see something different from Peter and John. Years before, the two were called before the Sanhedrin, the ruling council of the Jews. There were told not to preach Jesus Christ anymore. They disobeyed.

“But in order that it may spread no further among the people, let us warn them to speak no more to anyone in this name.”  So they called them and charged them not to speak or teach at all in the name of Jesus. But Peter and John answered them, “Whether it is right in the sight of God to listen to you rather than to God, you must judge, for we cannot but speak of what we have seen and heard.” (Acts 4:17-20).

What was the difference between Paul’s life-threatening circumstances and Peter and John’s refusal to obey? Peter and John were told not to do what Jesus had commanded. Paul was not told not to preach or teach. His accusations centered on him and his conduct and although the charges were false his situation did not rise to the same level.

Christians can, even must, disobey government when laws prevent the exercise of our Christianity.

But caution is required. Civil disobedience has often been used to bring about political change far removed from obedience to the Gospel. One might justify sit-ins and protests in some way but not through the Bible. Unless government assaults our faith we must remain good, law abiding citizens.

As it pertains to the present situation the course for the church is clear. We teach anyone, anytime and at any place. But that teaching must include respect for God’s governing authorities. Here’s is where it gets tough. We must teach those undocumented persons that they must obey the civil law even if the consequences are severe. The church can assist them with resources to help them gain their papers or even help them to return home. zlet us share with them the “whole counsel of God” (Acts 20:27) which includes respect for the powers that be. We are not the government nor are we agents of the government. But we can be helpful resources to assist those trying to obey.

It is also clear that we must extend a benevolent had to those in need without regard to government attempts to prevent such assistance. Benevolence is God’s will.

I do not believe that we are presently at a moment where such disobedience is required. Fear and rumor are our enemies now. But let us use the present to study and prepare for the future.

It bears repeating that we must use extreme caution here. Consequences are serious both legally and spiritually. But as for me, I stand first in the Kingdom of God. I am a Christian first and a U.S. Citizen second. Let me leave you with Jesus’ own words: Render unto Caesar the things that are Caesar’s and unto God the things that are God’s (Matthew 22:21; Mark 12:17; Luke 20:25).

Your comments are more than welcomed. May I also ask that if you find this post useful you will consider a tweet, a share or a digg? Thank you in advance.

Leave the Unrighteous Out of It!

Just Leave It To God

4 comments On Immigration and the Christian