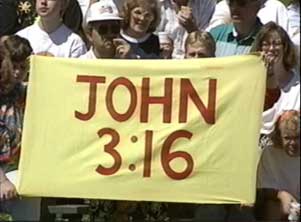 Belief that Jesus is the Son of God is essential for salvation. Would anyone question that? How can you be saved by something or someone that you do not believe in? Unquestionably we must believe in Jesus (1 John 3:23). But as we have said before on John 3:16, belief is more than a simple acknowledgement of some fact. Biblically, belief in Jesus was always accompanied by some action on the part of the believer.

What I wish to show in this article, is that saving belief includes certain actions on the part of the believer. Several examples will help including some from the Old Testament.

Adam and Eve both believed in Jehovah God. They enjoyed a relationship with him which was, at first, uncluttered by sin. They had been instructed by God as to how they should live; they could not even touch, let alone eat, of the Tree of the Knowledge of Good and Evil. The first couple clearly understood (Genesis 3:2-3). Nevertheless, they were disobedient and were thus punished with expulsion from the Garden, immediate spiritual death and the immediate beginning of physical death.

Noah was a preacher of righteousness as well as a boat builder.  He was the recipient of grace from God (Genesis 6:8). Noah was obviously a believer in God. He was also obedient to the Lord. repeatedly, the text notes that Noah was obedient (c.f. Genesis 6:22; Genesis 7:5; Genesis 7:9; Genesis 7:16).

Noah was blessed by God for his faithfulness (Genesis 9:1). Does anyone really think that Noah would have been saved from the Flood and blessed by God apart from his careful obedience? Would Noah, or anyone else, be saved in rank disobedience? It was necessary for him to both believe and to be obedient.

Peter preached the first Gospel sermon in Acts 2. It was a great day as the church began with power. The people who listened to his message already believed in God. They were devout Jews (Acts 2:5) who had come to Jerusalem for  to celebrate Pentecost. What did they now lack? They lacked a belief in Jesus. It is likely that some of the people in the crowd had witnessed the crucifixion. Perhaps some had even been among those hurling insults at the Lord. Peter delivered a masterful sermon which reached back into the Old Testament. His message convinced his hearers that Jesus of Nazareth was the Son of God.

When they heard Peter, they cried, “What shall we do?” (Acts 2:37). At this point, they believed that Jesus was the Son of God and that he was both Lord and Christ. But their belief was not sufficient. There was more. Thus Peter responded to their simple question with a simple answer. Peter told them to “repent and be baptized” (Acts 2:38). The purpose was included. Repentance and baptism brought remission or forgiveness of sins.

The people of Acts 2 believed but they also obeyed. Acts 2:41 is clear that those who were baptized were added to the church. Again, belief must be coupled with obedience.

Like the people on Pentecost, Paul was already a believer in God when he met Jesus on the Damascus road. Also like the people of Pentecost, he sought to be obedient upon his belief in Jesus. Paul asked the Lord, “What shall I do, Lord?”  (Acts 22:10). Jesus only told him to go into Damascus where he would be told what to do (Acts 9:6, Acts 22:10). At this point, Paul has yet to be told what to do. The text is in the future tense. What he must do is still coming.

Clearly believing in Jesus now Paul makes his way into Damascus. Ananias comes to him and delivers what Jesus told him to expect; Ananias tells Paul was to do.

While Paul’s actual baptism is not recorded, it is not questioned by any student of the Bible that I am aware of. Indeed Paul would argue forcefully that one must show deeds worthy of his repentance (Acts 26:20) and that baptism is the way in which we are united with Christ (Romans 6:3-8). Paul was a believer. But just like Adam & Eve, Noah, and the people of Pentecost, he was also obedient.

John 3:16 is just as true today as it was when Jesus spoke those beautiful words. God has always expected obedience of his people and today is no different. It is a comfortable doctrine indeed to assert that we need do absolutely nothing towards our own salvation. Such removes the tiniest speck of responsibility from me for the conduct of my life. But such is an incomplete Gospel. Obedience is essential. To be sure, we will stumble and our obedience will sometimes fail but God still delivers those who walk in the light (1 John 1:5-10).

Why would we not do all that the Lord has commanded? Baptism alone does not save but it is a piece of the obedience God requires.

John 3:16 and the Depth of Believing