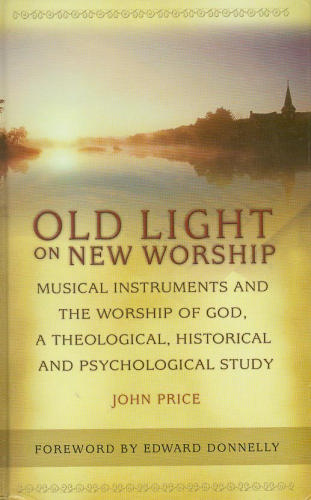 Sometimes a book comes along that ought to be read by every Christian. Old Light on New Worship is such a volume. Author John Price, a Reformed Baptist minister penned Old Light in 2005. It generated controversy in some quarters but was welcomed in others as very serious study of the role of mechanical instruments of music in the worship of the church. I am among the later group and I passionately commend this book to your study.

In 2010 we published Church of Christ Music: What’s the Big Deal About a Piano Anyway? It stated our firm belief that the only instrument permitted in Christian worship is the human voice. Anything else is a human addition and novelty. Price reinforces our judgment and confirms the thesis of our article.

Price began the studies that led to this book because of a recurring question. Why, Price wondered, did some churches in his faith demand only the piano while others used a growing number of mechanical instruments? I do not think Price expected to end up in opposition to the instrument.

His conclusion is simple. Speaking of mechanical instruments Price says,

“To bring them into the church is to transgress the authority of Christ in His worship” (pg. 228).

How does Price reach such a conclusion that is so far afield of what is typically practiced among those in his Reformed Baptist denomination? He approaches the subject in 4 ways. First, Price examines acceptable Biblical worship in the Old Testament. Among the more interesting observation is that the musical instruments utilized in Old Testament worship were uniquely and specifically authorized by God; they were never adopted by the likes and dislikes of the worshipers. Speaking of the restoration of Temple worship Price writes:

“The people of God continued to look back hundreds of years to what God had commanded through David in the Scripture, and they brought only those musical instruments into worship. They understood that God regulated his worship even in regard to the specific musical instruments…They never assumed they had authority to bring any other instruments into God’s worship without clear divine command” (pg. 29)

Price is clear that while the instrument was used in Temple worship, it was tightly regulated by God.

Next, Price examines the New Testament and seeks some justification for the use of instruments in the public worship. He cannot find such authority. After searching the New Testament Price arrives at a three part conclusion:

“When we come to the New Testament, the following three truths become clear: 1) The Old Testament Temple worship in all of its outward ceremonies and rituals has been abolished; 2) We must look to Christ and His apostles alone for the worship of the church; and 3) With no command, or example, or any indication whatsoever from the Lord Jesus that he desires musical instruments to be used in His church, we have no authority for their use” (pg. 54).

Price’s third line of study moves outside inspired Scripture and examines the thinking and attitudes of the so-called Church Fathers. He continues beyond them to include a literal multitude of Biblical scholars from the 2nd century, through the middle ages and into period of the Reformation. For example, there is this quote from  the 15th century Erasmus:

“We have introduced into churches a type of laborious and theatrical music, a confused chattering of diverse voices such as I do not think was ever heard in the theatres of the Greeks or Romans. They perform everything with slide-trumpets, trombones, cornetts, and little flutes, and with these the voices of men contend. Men run to church as to a theatre , to have their ears tickled” (pg. 86).

“We are not,indeed, forbidden to use, in private, musical instruments, but they are banished out of the churches by the plain command of the Holy Spirit” (pg. 94)

In the 1880’s, noted preacher and scholar Charles Spurgeon said of the instrument:

“What a degradation to supplant the intelligent song of the whole congregation by the theatrical prettinesses of a quartette, the refined niceties of a choir or the blowing off of wind from inanimate bellows and pipes! We might as well pray by machinery as praise by it” ( pg. 133).

Price observes that leaders of almost every protestant faith group has opposed the addition of instrumental  music in the worship of the church.

In the present day, the churches of Christ stand almost alone in demanding a pure worship with simple singing that comports with New Testament teaching. But Price, a Reformed Baptist, never alludes to the churches of Christ nor quotes any of its scholars or authors. His work depends heavily on research from Presbyterian John L. Girardeau in  Instrument Music in the Public Worship and he often quotes religious leaders from throughout the protestant realm. In other words, this is not a “Church of Christ book” promoting some aspect of doctrine, but instead a man outside of any group that opposes the instrument. He reaches his decisions based upon a thorough study of the Bible.

Old Light on New Worship is hardbound with 256 pages of well documented and footnoted material. He includes an extensive Bibliography and index as well. I suspect I would differ with Price on some issues but on the matter of mechanical instruments of music in the worship of the church, I fully agree. I encourage you to buy this book for yourself and also buy a copy for your preacher. It is an excellent piece of scholarship.

The End of Time… Again