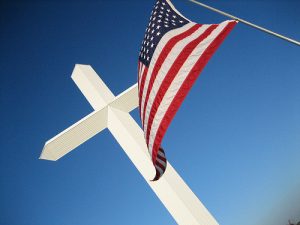 It is said that Christians have dual citizenship; they live in this country and in God’s kingdom simultaneously. The idea is that while we are Christians we are also Americans and thereby have allegiances to each. Our life is divided between the spiritual and the civic.

Let’s think about that because it might not be true.

The church is the kingdom as seen in Matthew 16:18, 19 where the text speaks of the church and the kingdom which are both still in the future. The kingdom was promised by John as being “at hand” (Matthew 3:2) and Jesus preached the same message during his earthly mission (Matthew 4:17). Matthew chapter 13 contains many mentions of the “kingdom of heaven” as He prepared His hearers for its imminent arrival. Those in the church are in the kingdom of God’s dear Son (Colossians 1:13).

Christians are obviously residents in this world. Whether in the USA or some other country, Christians are residents somewhere and have obligations. We are responsible to pay taxes and obey the laws of the nation. Such obligations are not to be taken lightly. Jesus taught that we are to “render unto Caesar the things that are Caesar’s and render unto God the things that are God’s (Matthew 22:21). We are “subject to the governing authorities” says Paul in Romans 13:1. There is no excuse for ignoring our earthly obligations to the state.

However, our allegiances to the country and to Christ’s kingdom are not equal.

We are Christians first and everything else second. There is no national law that supersedes the laws of Christ’s kingdom. When confronted with conflicting laws, Peter and John said, “We must obey God rather than men” (Acts 5:29). It is not simply the laws that may conflict. This world has an allure that clashes with God’s kingdom. Just like laws that conflict, we must be ready to reject the sparkle and glow in favor of the kingdom. Jesus was tempted by Satan with things this world holds dear, food, power and possessions, but he rejected every one in deference to God’s word (Matthew 4:1 ff).

You see, Christians are pilgrims (1 Peter 2:11, KJV). We are only passing through. Like travelers visiting a country and then returning home, we are only here for a while (James 4:14). While traveling we are expected to obey the laws of our host country but we are not overly concerned with local details. Our desire is to go home. Paul, thinking of the Christian as a soldier, says:  “No soldier gets entangled in civilian pursuits, since his aim is to please the one who enlisted him” (2 Timothy 2:4).

In our fleshly world, a traveler will show interest in his destination but as a true patriot he loves his home and longs to return. Likewise, we look for the return of our Lord and a new home (John 14:1-4; Hebrews 11:10). Our love is not of the country we are visiting but of our home. How could John say it any plainer? “Do not love the world of the things in the world” (1 John 2:15). James is even stronger: “Do you not know that friendship with the world is enmity with God? Therefore whoever wishes to be a friend of the world makes himself an enemy of God” (James 4:4).

Our lives really are not divided between spiritual and civic. There is the Kingdom of Christ only. Everything else, including the United States is a distant second.  Dear brethren, let your first passions be for the kingdom of Christ and not for the flag. Many brave men and women fought and died for the USA but only one died for your eternal salvation. Let us keep our priorities true.

Doing God’s Will Is Crucial