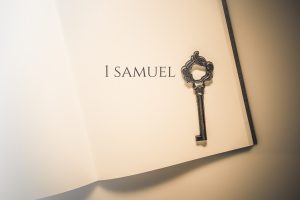 The books of 1 Samuel and 2 Samuel follow Ruth in the Old Testament canon. Understanding Ruth as a break in the flow of the Israelite chronology, we see the Books of Samuel continuing the sad story of Israel’s movement away from God. However, 1 Samuel opens with a hopeful story of change. Unfortunately, that change doesn’t bring the needed change of heart. Judges closes with the comment, “In those days there was no king in Israel. Everyone did what was right in his own eyes” (Judges 21:25). 1 Samuel opens with the coming birth of the priest, prophet and judge, Samuel.

Samuel soon replaces the weak priest, Eli, and his corrupt sons. For a moment it seems as though Israel is back on track. But Samuel stumbles in much the same way as Eli. He is a weak father and raises rebellious sons. The people ostensibly are fearful of accepting his sons as their future judges so, as Samuel ages, they demand a king “like all the nations” (1 Samuel 8:5). terribly displeased by the demand Samuel is told by God to allow  them a king. In a foreboding comment God tells Samuel, “they have not rejected you, but they have rejected me from being king over them” (1 Samuel 8:7). In my judgment, this is the key verse of 1 Samuel. The implications of their rejection of God would lead to immediate consequences but to problems humanity faces today.

What follows next is the story of King Saul, the first monarch over a united Israel. 1 Samuel traces his humble beginnings, his rise to royal superiority, his two major sins which cost him and his family the kingdom, and finally his death in the final chapter. It is in 1 Samuel that we meet David, son of Jesse. Herein, David is anointed by Samuel to be king after Saul. But David is forced to flee when Saul directs his rage at David and seeks to kill him. As the book of 1 Samuel comes to a close, David is still an exile and living among the Philistines. Saul and his son Jonathan are killed in battle and their bodies disgraced by the Philistines. 1 Samuel is an unhappy picture of Israel’s first experience with a monarch. 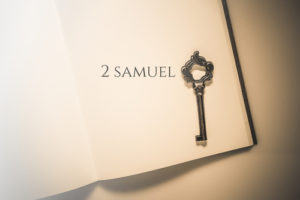 2 Samuel could have been named “David.” The book is a continuation of the history of the monarchs begun in 1 Samuel. This book deals almost exclusively with David, his rise to power and the consolidation of his rule. We also are shown the dysfunctional nature of David’s own family.

As the book opens, David learns of the death of Saul. Although Saul pursued David and sought to kill him, David always showed humility towards God’s anointed (1 Samuel 24:6; 2 Samuel 1:11, 12). David is next make King of Judah, not the entire nation. A son of Saul would serve as the puppet King of Israel. Son, the puppet king was killed and David was made King over all 12 tribes (c.f. 2 Samuel 5:1-5).

After an abortive attempt to bring the Ark of the Covenant into Jerusalem, David succeeds. Israel has peace all around (2 Samuel 7:1). The peace is short-lived and Israel again battles the Philistines and the Ammonites.  This later war is the background for a tragic milestone in the life of David. While the battle rages, David consorts with Bathsheba and to this adulterous union a child is born. To cover his sin David resorts to scheming which eventually leads to the murder of Bathsheba’s husband. David thinks his sin his covered but is soon confronted by the courageous Nathan, a prophet of God. The consequences of the sin cause the death of the child and a never-ending conflict within David’s own family.

Soon comes the incestuous rape of David’s daughter by his son Amnon (half-brother to the victim Tamar).  Another son, Absalom (brother to Tamar and half-brother to Amnon) avenges the rape by killing Amnon two years later. Absalom flees but later returns to Jerusalem. In time, he will lead a civil war to dethrone his father David. David briefly flees Jerusalem but soon Absalom is killed and the kingdom restored to David. We note that despite his sins, David was still a man after God’s own heart. His penitent heart, although imperfect, pleased God. As 2 Samuel ends, David is found worshiping God and being blessed by Him.

1 Samuel and 2 Samuel were often included with 1 Kings and 2 Kings. In fact, the similarity between the four books produced a division once labeled as 1, 2, 3, and 4 Kingdoms. (1)Archer, Gleason, A Survey of Old Testament Introduction, 1994

1 Samuel and 2 Samuel were written somewhere between the 8th and 10th century BC. The books offer no direct claim of authorship. However conservative scholars generally hold that Samuel, perhaps along with prophets Nathan and Gad worked together to author the books. Jews assert the authority of the books from ancient times. Whomever the physical author(s), the Holy Spirit is behind the authorship. Some non-canonical sources may have been used at the direction of the Holy Spirit. 2 Samuel 1:18 references the book of Jashar. (2)Bergen, Robert D. 1, 2 Samuel. Vol. 7. Nashville: Broadman & Holman Publishers, 1996. Print. The New American Commentary Use of existing sources is not troublesome and his common across both the Old Testament and the New.  Scholars with a low view of Scripture frequently assert that Bible books are little more than collections of various community writings and oral traditions. We do not deny the use of sources but, again, any material used would have the approval of the Holy Spirit.

These two books offer strong historical reporting of the earlier days of the monarchy. But they also show Jehovah working carefully in human history to bring about his will and his plans. The pattern of blessing and cursing is instructive to Christians today.

Your comments are welcomed and desired.