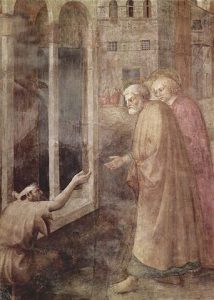 Miracles fascinate the mind of almost everyone. Even the skeptic who denies that miracles ever occurred must look with wonder at the great stories of the resurrection. He should ponder how the church came to exist against the backdrop of the resurrection stories which were so easily investigated by people who were contemporaneous with the events themselves. Believe them or not, miracles are an important part of the Bible. They serve an important purpose. Our goal is to identify that purpose and see how it is served by miraculous works and signs.

Biblical miracles are events which cannot be explained by any rational, natural explanation. They require that some law of nature be set aside or suspended. For example, consider the case of a woman who makes a sudden recovery from an illness thought to be terminal. While her recovery may seem astonishing, it is not beyond the ability of science to explain her improvement. In fact, such remarkable recoveries occur often. God may have worked through science to bring about her recovery, but he did not set aside the laws of nature to accomplish that task. In other words, it was not a miracle in a biblical sense.

Consider the case of the impoverished lame man of Acts 3. First, this well-known man had an established, debilitating, and obvious illness: he was crippled from birth. After declaring his intent to heal the man (vs. 6), Peter raised him up immediately, and the man began to walk. The result of the miracle was “wonder and amazement” (vs. 10). Such a response would have given instant validation of the bona fides of Peter and John. As they would speak, the people would listen. From this brief description, we may conclude the following. First, a biblical miracle requires that a condition be confirmed (the man was lame from birth, and everyone knew it). Second, there was an intent perform a miracle (vs. 6). Third, was the miraculous, unexplainable outcome (vs. 7, 8). And, fourth, there was a response of amazement from the bystanders (vs. 10).

Any claim of a modern-day miracle must be tested against the biblical pattern.

Let us show the importance of the bystanders to biblical miracles. In John 3:1-11, Jesus performs the first miracle of his earthly career; he turned water into wine. the result, according to vs. 11 is that his disciples believed in him. In the next chapter (John 4:1-45), Jesus reveals unknown details of a woman’s life. She is amazed, and so are her neighbors (John 4:39-42). In Luke 18:35-43, Jesus heals a man of blindness. Not surprisingly, the result is people “glorifying God” and giving praise to God (vs. 43).

Next, observe the resurrection of Jesus and its result on the beginning of the church. Jesus death was confirmed by hostile Roman executioners who were well acquainted with death. He was placed in a sealed and guarded tomb to prevent the theft of his body and a fraudulent claim of resurrection. Still, he arose on the third day. His death was beyond question. His claim of coming resurrection was well known. And, to verify his resurrected life, the risen Lord appeared unto hundreds of people during about five weeks between Passover and Pentecost (c.f. 1 Corinthians 15:3-8).

Pay particular attention to Acts 2. Peter’s sermon was in the city of his death and resurrection. That crucifixion and resurrection happened within less than 2 months of Peter’s sermon. So, the claim that Jesus was risen was made to the same people, in the same city and at the same time of that resurrection. Days later, great angst is seen among the Jewish leaders because of the establishment and growth of the church (Acts 4:13-18). Today, Christianity, predicated upon the resurrection of Jesus, is massive. How did that happen? How shall we explain its growth from its infancy in the city of Jesus’ resurrection? The answer is clear, the people were astonished by Peter’s preaching of the resurrection of Jesus. They heard, were convinced, were amazed, and they responded appropriately. The miraculous resurrection of Jesus confirmed that he was who he was claimed to be. The apostles preaching at Pentecost was likewise confirmed by the miracles of a “sound like a rushing mighty wind…divided tongues of fire” and the apostles began to “speak in other tongues” (Acts 2:2-4).

Miracles confirmed the inspired word that was preached. Any revelation from God today would likewise require such confirmation. Further, that confirmation must rise to the caliber of a biblical miracle for nothing less is acceptable.

We Must Obey God