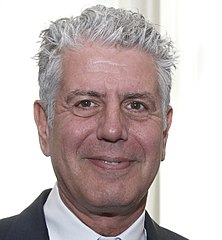 You never really know what is in the heart of someone, do you?

We have the trite cliché that “you can’t judge a book by its cover.” Scriptures say it differently: “…man looks on the outward appearance, but the Lord looks on the heart” (1 Samuel 16:7). You and I may have an idea of what is going on in someone’s life, but only that person and the Lord know the truth.

A famed food critic died Friday. He killed himself. Anthony Bourdain had won almost every award in his field including the famed Peabody Award for reporting. He was a food critic that rose to the top of his profession and gained famed for an award-winning series on CNN entitled Parts Unknown, which had just begun its 11th season. Bourdain had what many would consider the greatest job ever: travel the globe and consume every delicacy prepared by the great chefs of the world.

Bourdain’s glass was empty. Friday, he hung himself in a hotel room in France.

I don’t know much about culinary arts. My gastronomic expertise extends to the grill on the patio. I’ve never watched Parts Unknown, and I probably cannot pronounce half the foods Bourdain consumed. But I can learn from his tragic ending.

Judas was a corrupt and scheming man who betrayed the Lord of Life. Yet, only Jesus knew of his dark heart. As he dined with Jesus and the others apostles at the Last Meal, no one knew the depth of his sin except Jesus. He hilled himself too, just hours before Jesus died.

Don’t you know of people who seemed happy and even carefree but then ended their own lives? We are left to clean up after their decision. We are the ones left with the guilt of wonder if there was anything we could have done to save them. Probably not.

Why are people so hopeless? Why is life so dark? They have surrendered to the prince of darkness. They no longer know or trust Jesus and his people.

Jesus said, speaking of the devil, “The thief comes only to steal and kill and destroy. I came that they may have life and have it abundantly” ( John 10:10). You and I must search for those who hurt and share the love of Jesus with them. Sometimes the task is hard and the hours long but the reward of soul saved is so worth it! Is there someone you can touch today?

Old School: Lessons from My Daddy