Through the Eye of a Needle 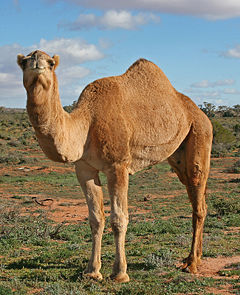 the Middle East. They have been used in combat for millenia and were even used experimentally in the American Civil War. The camel has an ability to frighten horses and so they have proven useful on the cavalry battlefield.

Jesus spoke of the camel in the synoptic Gospels just after speaking with the rich young ruler who was told to sell all that he had. Matthew records the words similar to Mark and Luke:

Again, I say to you, it is easier for a camel to go through the eye of a needle, than for a rich man to enter into the kingdom of heaven. (Matthew 19:24).

Such a comment was astonishing to the listeners who concluded that no one could be saved.  Jesus corrects their misunderstanding in verse 26 when he says that “with men this is impossible, but with God, all things are possible.”

It is indeed an odd, even cryptic saying of our Lord. What exactly does he mean and what should present day hearers take from this passage?

Some time ago, a teacher hit upon a way to explain this passage. The story is that the needle’s eye in the Gospels is not the same needle we think of today. Instead, the needle’s eye was a small passageway built into t he side of a walled city. The passage was so low that a camel would have to pass through by crawling and not walking. This would prove very difficult but possible.

An interesting suggestion but wholly unacceptable when one considers the facts.

A Camel Cannot Go Through the Eye of a Needle

Let us begin by taking the Scripture in their simplest interpretation. Using Occam’s Razor we make the fewest assumptions possible about what Jesus means and just take it at its face value. We know what a camle is and we know a camel cannot pass through the eye of a needle.

The Beauty of Jesus’ Words

What Jesus speaks of is impossible (Matthew 19:26). The word Jesus uses is a derivative of the dunamis in Romans 1:16 where Paul declares his faith in the Gospel as the power of God unto salvation. However in Matthew 19:26 the Greek word is prefixed by the letter alpha – a – which creates an opposite word. Instead of man have power to do something he has no power. Therefore, in this context of wealthy people, thy have no power to reach heaven within themselves. The power Jesus says, is with God!

While Jesus was speaking of the wealthy in these passages, the same idea – the impossibility of self salvation – is prevalent in other passages. Most notably Paul’s comment in Romans 3:28  and Galatians 2:16 that no man can be justified through works and Romans 5:23 that salvation is a free gift of God and not earned by men.

Jesus is saying that just as a camel cannot pass through the eye of a needle and man cannot earn or pay his way into heaven.

We ought use care not to move too far in one direction. Jesus is not declaring that man does nothing. Man must be obedient and faithful to Christ.  Just as the young ruler was instructed to do certain things, so too we have been commanded to do certain things. Jesus says in Luke 17:10 that when a servant has done what he has been told, then he has done nothing remarkable, just what he was supposed to do. Our actions and work are what we are supposed to do. Nothing more and nothing less.

Now when studying this passage, I hope you recall our discussion here. As always, this post is open for your comments.