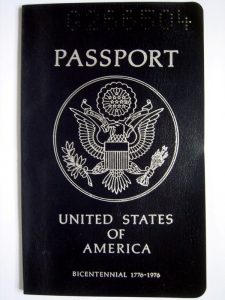 It is Sunday morning, 7 a.m. In two hours I will be teaching a Bible class. In three hours I will be worshiping with the family at the Eastern Shore Church of Christ. In 24 hours I will flying to Guyana where I will spend the next 2 weeks teaching men who want to preach the gospel.

Then I saw it. My passport was expired.

Just that fast my plans evaporated. There would be no trip to Guyana. Plans involving many people across two continents crumbled. I looked at the words again and again and they would not change. Expired. Expired! Expired!

The most aggravating part of the whole thing was that this was my fault entirely. There was no one else to blame. I fouled up.

But like most preachers who are always in search of an illustration, I found one. Here it is.

We Will Meet The Lord

For months, I knew I was going to Guyana. The date was set and all I had to do was be ready. I failed. There is another date that is coming for all of us. We will stand before the Lord in judgment. It is not a pleasant thought for many. It is a moment filled with fear and anxiety. But it is coming.  The writer of Hebrews is clear, “it is appointed for man to die once, and after that comes the judgment” (Hebrews 9:27).

Peter smacked the skeptics when he wrote, “the Lord is not slow to fulfill his promise…” and “the Day of the Lord will come…” (2 Peter 3:9, 10). Some were denying the return of the Lord. They argued that nothing had changed since Jesus died and he wasn’t coming again. They were wrong then and they are wrong now. Jesus is coming.

Christians do not deny that the Lord will return. They just forget or become apathetic about his return. But if you know the Lord is coming, should we not all be ready always?

Late is Too Late

As soon as I realized my passport was expired, I went to the internet. I surfed to the National Passport Center. I was hoping there was a grace period or some way I could renew online, right then and there. I found that there was no grace period (in fact there is a kind of reverse grace period). There was no way to quickly renew an expired passport on line. I would have to wait until Monday morning, call for an appointment and physically travel to New Orleans. In other words, I was busted.

The Israelites  were busted too. They assumed everything was fine. In fact, they were looking forward to the Day of the Lord. But Amos knew better. Contrary to their own thoughts they were terribly unprepared. After listing the ways God tried to get their attention and their subsequent rejection of his efforts, God says through Amos:

Jesus himself tells the parable of foolish virgins who came to the wedding unprepared. The bridegroom was late and when he arrived they realized they were without oil for their lamps. They scrambled to buy more but could not until it was already too late. The doors were closed and they were shutout (Matthew 25:1-13).

I think I can say that this will never happen to me again. I will never allow my passport to expire again. But I only missed a single, albeit important, trip to Guyana. What would it be like to be eternally too late?

My passport expired August 4, 2013. My trip was set firm for December 9, 2013. During the interim I could have renewed. In fact, I could have probably waited until November to send in the paperwork. Of course I did not, but I could have because I knew the date that it would be required. Not so with the coming judgment.

Jesus is clear, no one knows the date of his coming (Matthew 24:44). Believers are to be ready always. Men have tried to set the date of Jesus’ return and all of them have failed miserably. We know Jesus is coming but we do not know when. So the importance of preparation is clear. We must be prepared always for the return of the Lord.

A family I know was adopting a child from Russia. They were unsure when the adoption would finalize or when they would be called to Russia. Do you think they kept their passports up to date?

Be prepared. The Lord is coming.

Who is Simon Magus?