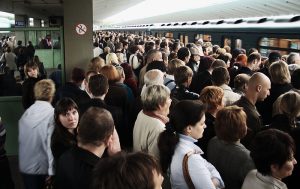 The United States hit a population milestone this year surpassing the 320 million mark. That’s a lot of people but it is still lives us a very distant 3rd in the global population race. Both India and China count 4 times more people in their borders than we do. Worldwide, there are now over 7 billion people.

When one stops and thinks that each Christian is given the task of bringing the good news to others the task seems enormous. But God gives us nothing beyond our reach. The Great Commission texts of Matthew 22:18-20 and Mark 16:15-16 are doable. The Lord would never have given the command if the results were beyond our reach.

It may be that we need to stop looking at the great forest and look instead at the trees.

Most of us have 2 neighbors within walking distance. Those who live in a planned neighborhood or in an apartment complex may have dozens or even hundreds within seconds of their front door. Let’s start there.

When the church first began Peter preached to the people who were there, at Jerusalem, and within the sound of his voice (Acts 2:1 ff). It is not until Acts 8:1 that people began mission type activities. But even then,  they continued to speak to people in the towns where they migrated to.

Evangelism among the original Christians was not sophisticated. It was incredibly simple. It involved people talking to other people about something important to them – Jesus. Opportunities for the Gospel abound.

Maybe the answer lies in the simplicity of their actions. What if today we simply spoke to people we know about Jesus? What if you turned off the computer and walked next door? Right now?